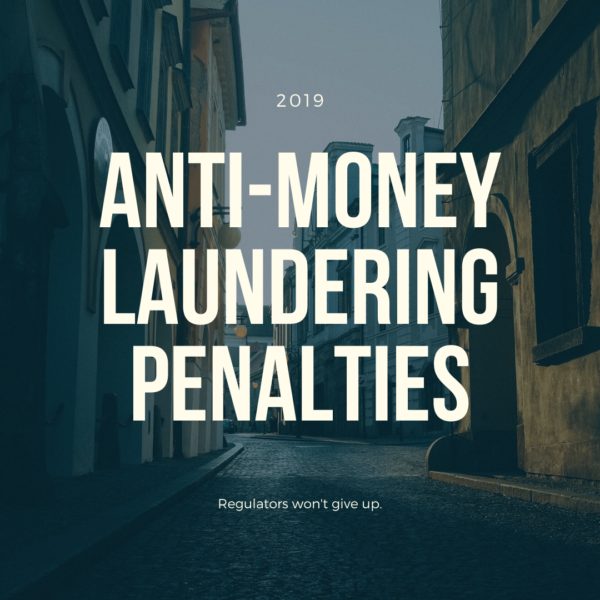 It seems that every year, more anti-money laundering penalties are handed down by regulators. However it may seem, the numbers prove that regulators almost doubled the value amount of penalties being handed out from 2018 to 2019. In 2018, 29 fines valued at $4.27 billion were handed out.  Last year, 58 fines valued at $8.14 billion were handed out. That is double the amount of penalties, with almost double the value. The average fine from 2019 was $145.33 million, which proves that AML compliance is a necessity for those being regulated. It is expected that the number of fines and the values will continue to increase in the future.

One of the most interesting comparisons from 2018 to 2019, is the industries that received these fines. In 2018, two-thirds of those fined were banks. This dropped significantly in 2019, with less than half of the 58 fines going to banks. With more and more industries being targeted for regulation, one could estimate that banks will continue to account for smaller percentages of these fines. For example, the United Kingdom is now focusing on the art market and the European Union focusing on cryptocurrencies.

The value of each fine is also increasing year-by-year. It was commonplace to see multi-million dollar fines in previous years, but now the use of multi-billion dollar fines are appearing. Two of the fines in 2019 were valued at over $1 billion dollars. Not only is the value on the rise, but the countries participating in AML regulation is also increasing. In 2009, only 3 countries handed out fines. A decade later, 14 countries participated in these regulatory fines.

With the number of fines, the value of each fine, the number of countries involved, and the number of regulated industries anti-money laundering penalties should be on a lot of businesses’ minds. Money laundering and financial crime has some seriously negative economic and socioeconomic effects. Regulators will continue to ramp things up in a bid to control these practices, while both the criminals and the industry leaders will continue to pay for non-compliance with laws and regulations.