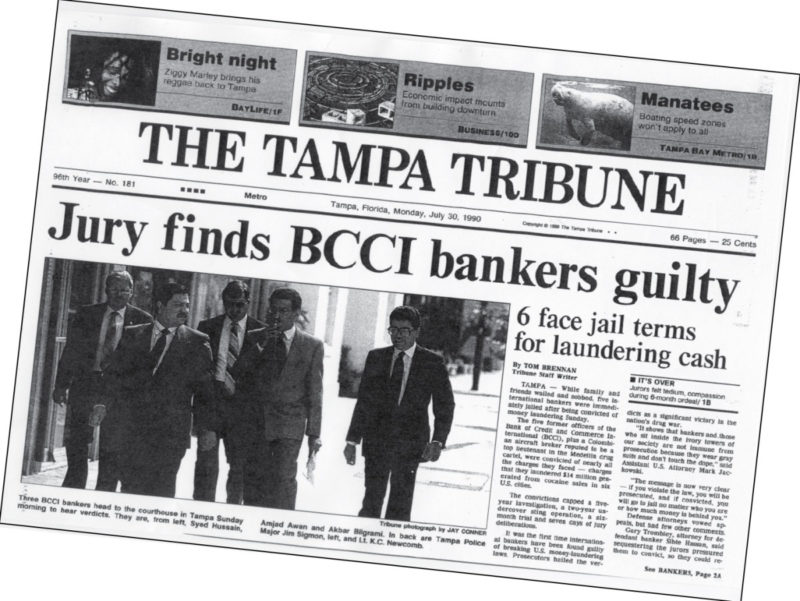 When in 1995 Truth Technologies was born, it was with a vision of future regulatory needs, based on past events. And those events triggered the ever-greater demand by banks in the US for KYC regulations. Regulators would sanction financial institutions for wrongdoings. However, without Know Your Customer regulations bankers were arguing that it was impossible to comply.

In the 80s and 90s a series of banking scandals would pave the way to greater scrutiny of the banks and their customers. In our case four scandals showed the future direction of banking supervision: Banco Ambrosiano, BCCI, Banque Leu and Operation Casablanca. Those showed the emerging need for banks to comply with new regulations, notably OFAC compliance and KYC compliance. Sanction screening and PEP screening came in the aftermath. Today I’ll talk about BCCI, Bank of Credit and Commerce International.

In 1972 a Pakistani banker, Agha Hasan Abedi registered BCCI as a private bank in Luxembourg. He also created Head Offices in London and Karachi. It supposedly had been a preemptive move to escape bank nationalizations in Pakistan, which happened in 1974. 25% of the capital for the creation of the bank was provided by Bank of America, 75% by Sheikh Zayed bin Sultan Al Nahyan, ruler of Abu Dhabi.

BCCI was growing at a fast pace: after 10 years in business, it operated with more than 400 branches in 78 countries. The bank was attracting large deposits from high net-worth individuals and large entities. By the 80s it had grown to be the 7th largest private bank by assets. It also attracted a list of clients that would sound like a satire litany to today’s compliance officers: Saddam Hussein, Abu Nidal, the Medellin Cartel, Manuel Noriega to name a few. BCCI was eventually called “Bank of Crooks and Criminals International”. A special flavor to that mix of clients is added by other well-known entities as BCCI covered the world: the Saudi Intelligence Agency, the CIA and the NSC were clients.

The bank’s strategy was defined by an obsession of secrecy and opacity. The setup included several entities, regulated in various jurisdictions or not at all. There wasn’t a unique overall regulator for the company split up under BCCI Holdings into BCCI Luxembourg SA and BCCI Overseas in Cayman. Other subsidiaries were added through acquisition and new creations.

Management and control were very tight in what was a horizontal organization. All managers would directly report to Mr. Abedi, the Founder. No investigator or regulator could easily pierce the intricacies of such a setup. It worked perfectly well when BCCI decided to acquire US banks. Such an acquisition was indeed prohibited through OCC’s (the US Office of Currency Control) action against BCCI. The case of First American is a bright example how the secretive setup served to circumvent the interdiction: A number of BCCI clients acquired the bank in their names, with a loan from BCCI, with First American shares as collateral. When those clients didn’t pay interest on the loans, BCCI came illegally into ownership of a majority of shares of First American.

The pattern of wrongdoings couldn’t go on forever. US customs infiltrated the bank. UK regulators pushed for consistent overall regulation, Florida disallowed BCCI, and the US Congress and the UK started investigating.

On July 5th, 1991 a Luxembourg Court ordered BCCI to be liquidated. It was insolvent due to its irresponsible lending practices. The same day UK regulators shut down the bank. More than a million customers were left struggling. Liquidation took more than 20 years. 75% of losses are said to have been recuperated. Not sure if there is an unknown amount of hidden and laundered money that was never claimed or reported as a loss.

An amazing detail is that more than 10 years after the Court order to liquidate BCCI, there was still an operating account for BCCI at Clearstream in Luxembourg! Proof that BCCI was a tentacular creation where one part was removed enough didn’t get the news of the demise.